I am back! I had a wonderful trip and I was treated like a queen :p. I took lots of pictures, but I will upload later. I have the weekend off, which is good because I need a break from taking a break (total first world problem). Here’s a sneak peek:

It was a warm day in Eastern Canada…Now, back to reality! I got up, hopped on a plane, came home for a visit. The End.

Oh, alright! If you insist…

It was a cold day and the forecast called for light snow (under 1cm, which means there won’t be snow). I was hoping the weather by the airport would be good —-wishing for good weather in the East is like praying for a miracle —-I didn’t want my flight to be canceled or delayed. It’s weird sometimes, how the weather changes every 1 or 2 blocks. At my place it could be snowing, but 2 blocks down the road, it could be sunny (Mother Nature never makes sense). But, I made it to the airport, and the sky was clear!

I love airports —-when good luck is in my favour —- and in fact, I used to go to the airport just to watch planes take off and land. I arrived three hours early (yes, too early), and got through security in the blink of an eye. The lady in front of me was given a hard time over a souvenir. They had to send it through another xray and asked her to step out. She was annoyed, but obliged. I’m glad it wasn’t me.

I proceeded to my gate, because that’s what I do right away, to make sure I know where it is. I located it right away, and went to a nearby restaurant. I had one of my favourite foods, spaghetti and meatballs —- nothing screams flight nervousness louder than comfort food — and hung around for a while.

I sat by the window and looked at the view and my plane. Then, I saw a young woman sitting next to me, and she had the cutest puppy EVER with her. She mentioned it was the puppy’s first trip. We exchanged a few words until boarding time. 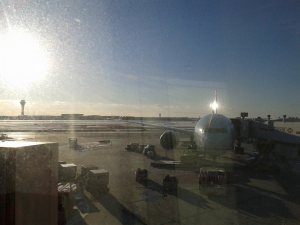 How gorgeous is this view?

The first thing I did, as soon as I got on the plane, was check the safety procedure. I think I’m the only one who does, everyone else probably just expects to die right away, if something were to happen. My plane was a new plane, it had (approximately) 150 seats more than the biggest plane before this one was built. The seats were comfortable (leather), but the boarding time felt like earth’s entire population was boarding. Listen, passengers just kept coming in, and it took so long, I watched an entire episode of The Big Bang Theory during boarding. I can’t complain, it was a smooth boarding. Passengers were helpful with each other (so sad this is shocking nowadays).

The pilot started the engines, and we approached our runway. This is the time where the safety video plays, but instead of a video, we got the instructions via a passenger announcement on the tv screen. There were no pictures (they have the pamphlet on your seat), just a voice. I guess this means no more safety videos, and no more live demonstrations by the crew. What a disappointment! I pay for my ticket and I expect entertainment by the crew. I love watching them pretend, we would all be calm if the plane were to crash.

I didn’t feel the take off as much as other flights, which was good news to me. Not to give you nightmares or anything, but the first 15 minutes are crucial. I saw the city lights below me —yes, boarding took so long it was nightfall, and got ready to select a movie.

I went with the movie ‘Gravity’ with Sandra Bullock and (sort of) George Clooney. I love Sandra Bullock, she is a great actress, but this movie was boring, it wasn’t BAD, but it wasn’t GOOD. I watched it with high expectations, after seen (some) good reviews. I know it’s about survival and appreciation for life, but it’s not something we haven’t seen before. The effects looked good, but other than that, the movie is just Bullock moaning every second — I get it, she’s scared, but it was annoying — Clooney disappearing every minute, and astronauts floating in space waiting to die. I gave it a try, the beginning was good, and I was clinging to the edge of my seat.  However, I was waiting for a good plot twist. For example, Bullock and Clooney fighting against each other, flying into an alien aircraft, twerking in space. But, those dreams never came true, and they were crushed by more moaning and lame explosions (Michael Bay should’ve had input on this).

The lesson? Earth is beautiful, gravity is awesome, earn millions in Hollywood by moaning while floating in space,  and when your oxygen is running low, the logical thing is to keep moaning until you exhaust all your resources, and panick when you realize you only have a small oxygen percentage. Perhaps, if I had seen it in theaters, my opinion would be different. I don’t know. It wasn’t terrible, but it wasn’t great. They could’ve definitely done more.

After that, I turned on my laptop and watched Lord of the Rings (the Fellowship). We had a bit of turbulence, but it wasn’t scary. We were approaching landing, and the pilot decided to tell us the winds were strong, the runaway was short, and we would feel the landing a bit more than usual. While I appreciated this gesture, I would’ve rather not heard it. Usually, I only want to hear when something goes wrong, if it will cause my imminent death. Other than that, let me know when you plan to make an unnerving announcement, so I can plug my ears. Not to mention, I heard this girl (she was around 10-12)  behind me saying loudly, “we’re flying too low!!!!” Well, we were landing, you know? What do they teach in schools?

And that was it. I can’t complain, it really was a good flight. The pilots and crew were great as usual, and while Gravity made me wish I lived in another galaxy, at least I can now say I’ve seen it. Remember the pilot’s announcement? Well, the winds were gone, rain had stopped, and we had a smooth landing! So, let’s leave it at that.

Of course! The world sort of rules me today.